An owner of a famous circus rests at Green Lawn Abbey. 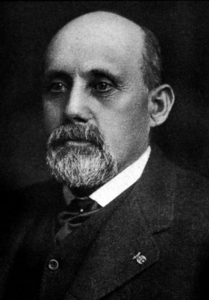 “To what man who passed his boyhood in the middle west during the last quarter of the nineteenth century is the name of Lewis Sells unfamiliar? It was a name which stood to him as a synonym of wonder, pleasure and admiration, for it represented to him the display of all that is interesting and enticing in show life. He was born in Columbus, November 12, 1841, and died in this city, September 5, 1907, in his 66th year.” (Excerpt from an old unidentified newspaper article.)

Although Lewis spent much time on the road, he always claimed Columbus as his home. After his education at Hiram College, he worked in the auctioneering business. In 1871 he turned his attention to show business along with his brothers, Ephraim, Allen and Peter. They began with one tent and a few side-shows. In 1872 they invested $35,000, which represented their lifesavings and all they could borrow. Their first performance was in Columbus in 1872 with receipts of $1,540. It was three years before they had another day’s receipts equal to that opening day in Columbus.

During the winter of the early years the circus was housed on Main St. between Grand and Washington Ave. As the city grew, it was moved to a new home on the banks of the Olentangy River at King Avenue. This area later became known as Sellsville.

In 1882 Allen Sells withdrew from the circus. The three remaining brothers continued with the circus until Ephraim died in 1898 and Peter in 1904. Lewis Sells, the last survivor of the original partnership, soon retired as well and spent the rest of his days in Columbus.