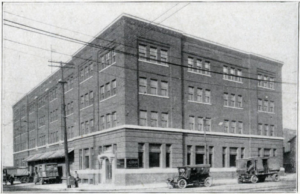 George William Bobb (better known as “Will” to distinguish him from his father) was born in Columbus, Ohio, on August 18, 1871. He was the son of George and Mary (Kaetzel) Bobb. He attended Columbus public schools until he was15 before attending Columbus Business College to prepare for a future in the business world.

George Bobb Sr. was a very successful wholesale grocer and owner of George Bobb & Sons. Both of Will’s older brothers were already in partnership with their father when he was taken into the family business. Upon Will’s joining the firm, the elder two brothers withdrew and started their own firm. This left the management of the older establishment upon Will’s shoulders.

Miss Nellie Pryce, daughter of pioneer railroad man Edward Pryce, and Will were wed in 1895. In 1903, Will left his position as general manager and buyer at George Bobb & Sons to start his own business, the G. W. Bobb Company. The business enjoyed immediate success and grew steadily. The Centennial History of Columbus cited Will to be “one of the strong and influential men whose lives have become an essential part of the history of Columbus” and that he had the “genius for devising and executing the right thing at the right time.” He made a fortune.

The G.W. Bobb Company occupied a four-story building located at Naghten and Neilston Sts. With two elevators, steam heat and their own private spur track for the railroad, it was the most modern building of its kind in the Midwest.

If you have any personal information or picture of Mr. Bobb, we would like to hear from you.